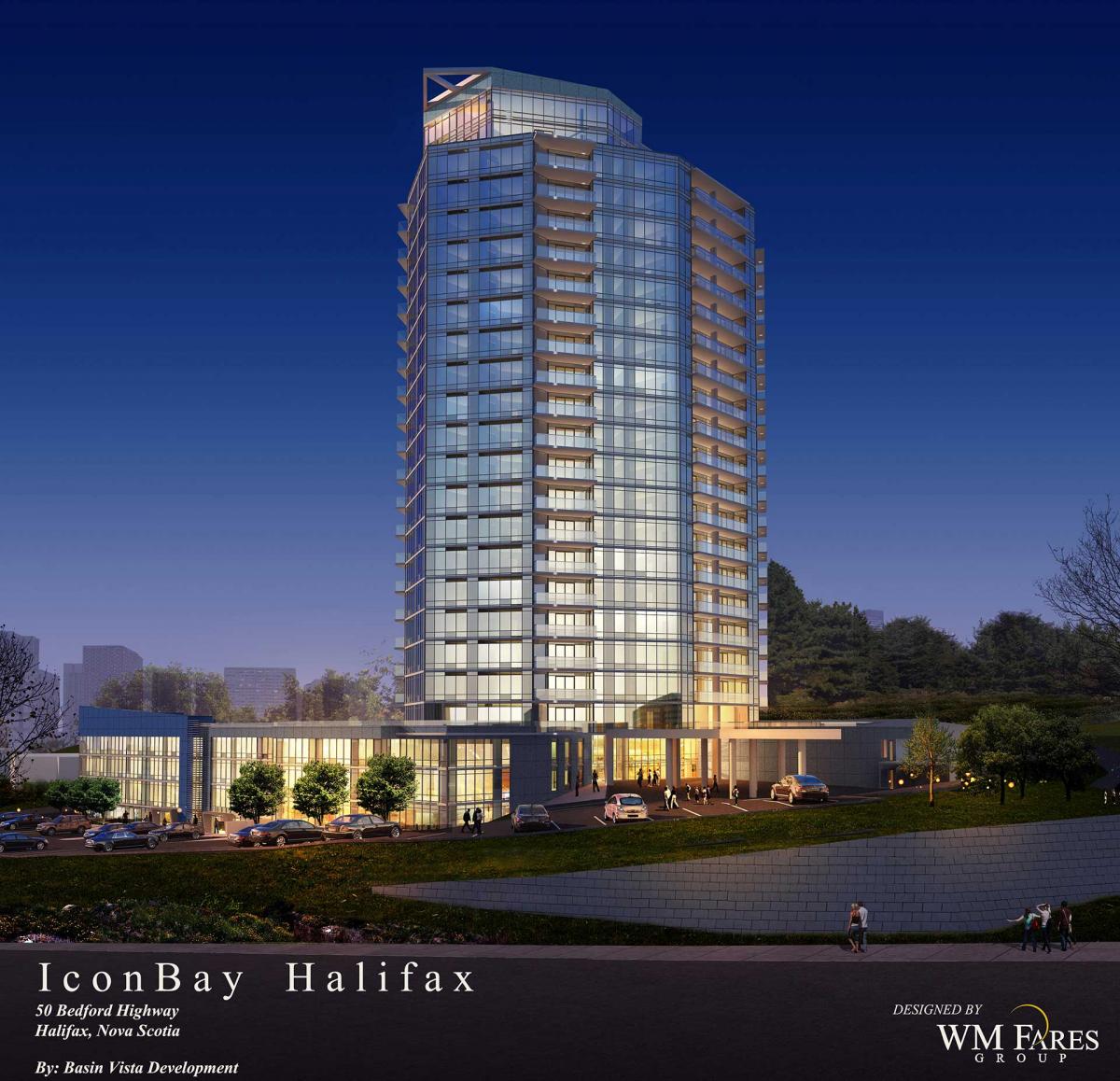 Since that didn’t quite turn out as advertised, I can at least examine Icon Bay’s strange site history.

Once upon a time a French Aristocrat was sent by France to conquer Halifax. His name was Jean-Baptiste Louis Frédéric de La Rochefoucauld de Roye, Duc d’Anville. He and his expedition were a bit of a disaster. They almost all died, with their fleet stuck in Bedford Basin, afflicted by various health problems, including typhus and scurvy, and hammered by storms on the crossing. Hundreds died on the voyage alone, and many more perished when they finally arrived, including d’Anville himself, who suffered a stroke six days after bringing what was left of his fleet into the harbour. The dead are buried, for the most part, at the very site where Icon Bay has arisen. Talk about your bad karma.

The statistics on the d’Anville Expedition are astounding. The fleet was comprised of 64 ships with 11,000 men, and was to be supported by a force of 1,300 sent from Quebec and also drawn from local native allies and Acadian settlers. The plan was to retake Annapolis Royal and then move on to attack Boston. It all ended in disaster, and by the time what was left of the French fleet returned to France in October without achieving any of their objectives thousands had died, including hundreds of Mi’kmaq allies infected by disease.

There’s a little memorial cairn to d’Anville on a tiny little park next to Rockingham’s rail station near the junction of Flamingo Drive and the Bedford Highway. Along with Duc d’Anville Elementary School in Clayton Park, where I went to school and my mother taught French, little remains to mark the doomed expedition.

Compare the treatment meted out to the remains of the dead from the d’Anville expedition to that of the American prisoners of war from the War of 1812 who are now solemnly commemorated by both the US and Canadian Governments on Dead Man’s Island on the Northwest Arm. Their numbers were less than 200, although their suffering and sacrifice are now rightly and resolutely recognized. Those ghosts, let’s hope, have some solace.

As for the ghosts of d’Anville’s men, they may at least have some entertainment in the giant Icon Bay complex. The website for the building promises ‘theatre rooms’ and ‘workout areas’ along with a perky picture of a possible tenant with a fluffy puppy: ‘Icon Bay is Pet Friendly!’

I hope it is also ghost friendly, because there is a second set of ghosts haunting the site!

From 1869 until the 1940s, the Icon Bay area was the repository for Canada’s Home Children, who came to Canada as part of the child migration scheme founded by Annie MacPherson in 1869, under which more than 100,000 children were sent from the United Kingdom to Australia, Canada, New Zealand, and South Africa.

This plan resulted in four million Canadians having Home Children family connections today, but it separated siblings, broke up families, and sent defenseless children into often horrifying conditions. Boys were prized for heavy farm labour, and were often fed scraps and forced to sleep in barns with the animals. Girls were kept for domestic service. While some were treated well, the majority lived grim and unhappy lives until they were released at the age of majority, usually with no payment for their work.

The Home Children were the subject  of a conference last week at Halifax’s Pier 21 Immigration Museum. There is a national society devoted to their history, and it is a cause worth considering. Both Australia and Britain have taken responsibility for the plan – Gordon Brown’s tenure as Prime Minister featured his heartfelt and very articulate apology – but so far Canada has not deemed the issue of the Home Children worthy of an official apology or recognition. In Australia, where the plan actually ran on, unbelievably, until the late 1960s, the Home Children have become a cause celebre, known as the ‘Forgotten Australians’.

There is a British/Australian Feature film on the subject entitled Oranges and Sunshine, made in 2010.  Halifax filmmaker Donna Davies made a modest but poignant hour-long documentary for Global TV 2002 called Childhood Lost: The Story of Canada’s Home Children, which I heartily recommend Once you see it, you will remember it for the rest of your life.

Most recently, there was a Wandlyn Motel on the Icon Bay site. But before that the Home Children barracks, farm and orchard was located there, as the dispossessed children of Empire awaited their orders from the rest of Canada – males for an Alberta farm, perhaps, or females for domestic service in Toronto. Those ghosts have yet to be placated.

At the same lonely little park down the road on the Bedford Highway next to Duc D’Anville’s cairn, there is a forlorn little panel explaining the tragedy of the Home Children. Both a worth a look, if only to remember some of the ghosts that will undoubtedly be haunting Icon Bay’s shiny newness for some time to come.