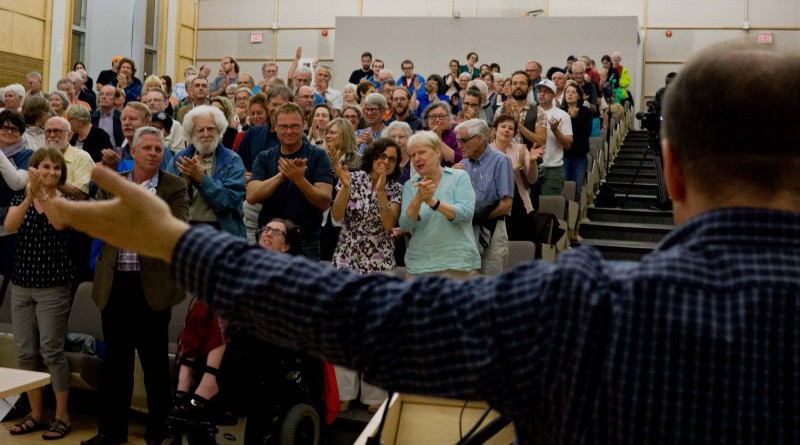 At the meeting there were some optimistic signs. Justice Minister Diana Whalen, a longtime proponent of the Wilderness Area and Park, spoke passionately of her involvement in the project. More importantly, she stated that the Provincial Environment Minister, Margaret Miller, will be weighing in for the Province with an opinion that will oppose any development.

Halifax Chebucto MLA Joachim Stroink stated that the issue had been discussed in the Provincial Liberal Caucus that very day, and concerns had been expressed.

Two HRM Councillors, Jennifer Watts and Waye Mason, attended the meeting to show their support for the Park and Wilderness Reserve in its original form.

Several candidates for the upcoming municipal elections also made statements, including Richard Zurawski for District 12, Pamela Lovelace for District 13, and Lil MacPherson, mayoralty candidate for HRM, all advocating the anti-development, pro-park line.

There were several touching testimonials about the Susie Lake Area, from veteran paddlers to environmentalists to lifestyle enthusiasts who believe that the giant Reserve will enhance the City’s attractiveness to young IT workers.

Several speakers attested to the fact that they are so committed to the park they would be willing to “lie down in front of the bulldozers” or “tie themselves to a tree.” Clearly,the battle lines have been drawn, but hopefully it won’t come to that.

Whether all this passion and commitment is enough to save the proposed Park and Wilderness area remains to be seen. While there is a groundswell of support, and the Blue Mountain/Birch Cove Wilderness Area may indeed be the key issue in this fall’s municipal elections, there’s also no question that it has not yet reached the top of the provincial Liberal government’s agenda.

There is also a creeping suspicion that this is indeed a high-level fix, where the developers and their allies in government have done an end-run around a decade-long democratic process that has led to dashed expectations concerning what was supposed to be the biggest urban nature reserve in North America.

After ten years, the timer seems to be ticking down on the Blue Mountain/Birch Cove Lakes Park and Reserve.

We may know the result in a matter of weeks.