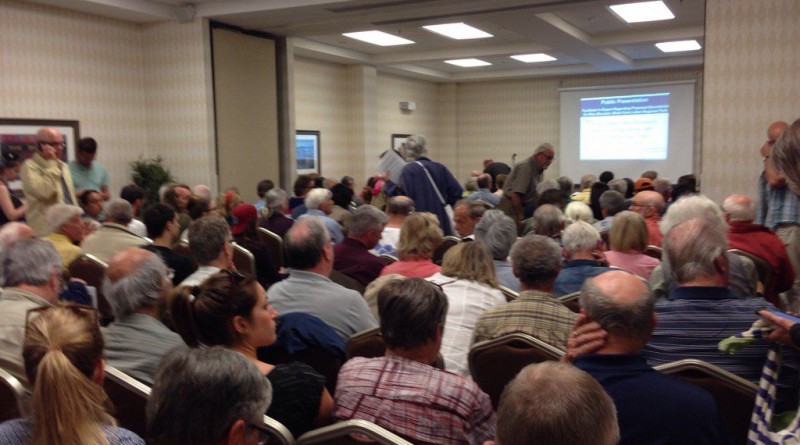 The “Presentation” of Justice Heather Robertson’s report on the Blue Mountain/Birch Cove Lakes Park Proposal came to a screeching halt at a bizarre meeting held in the tiny meeting room at the Lacewood Future Inn this evening.

Hundreds of people showed up for the meeting, held in a room that had a maximum capacity for 120.

The 35-minute meeting, surely the shortest and most deranged Municipal meeting I’ve ever attended, saw Justice Robertson attempt to justify her report, while a City solicitor added some technical details, before a developer sputtered through a plan to disembowel the proposed park.

The chair repeated that questions from the public were not to be taken. The public, which spilled out into the hallway and the lobby of the hotel, had plenty of questions anyway. Once those questions started flying, the ‘presenters’ simply gave up. They decided to cut and run, and the meeting was over, leaving a tsunami of hostility washing over the proceedings.

Holding a short meeting in an inadequate space is Bad Governance 101. There entire proceeding was an embarrassment – as one City councilor told me, it was as if Justice Roberstson had gone rogue, not understanding the process she had been brought into.

The mood of the crowd was ugly at times. When Justice Robertson said at one point that this review could be a three to five year process, for example, and that there would be a great deal more public consultation, I heard a person squeezed into the hallway near me say, “bullshit,” and another person followed up with “how much are they paying you.” At other times, it was hard to make out anything she or the other speakers said because of the boos that drowned out their remarks.

The result was farcical, uncomfortable, and deeply troubling. Halifax Regional Municipality seems to be at war with itself in the lead-up to municipal elections.

Factions are jockeying. Rules and decorum are being thrown out the window. There is a distinct feeling that the public may finally be at a breaking point when it comes to over-development in Halifax, and the perceived all-too-cozy relationship between the developers and many city councilors.

In the case of the Blue Mountain / Birch Coves Lake Park Proposal, years of planning and public consultation seems to have been tossed away in a sudden turnaround. Whether this is a temporary aberration or a grotesque sellout isn’t yet clear, but if it looks like a duck and walks like a duck… well, you know what it is.

What is clear is that there are many, many people who are very, very angry about how things have come about. Some stomped out of the meeting in the first five minutes; others walked out during Justice Robertson’s remarks. Many left during the developer’s increasingly quavering presentation. They were shaking their heads in disbelief. I can’t blame them. This might have been the strangest meeting in Halifax Regional Municipality’s entire history.

Halifax’s rampant over-development has reached a new level of madness, and the citizenry is on the verge of revolt. In the old days, pitchforks and burning torches would have no doubt been seen.

Citizens can make comments on Justice Robertson’s report and the developer’s proposals on the Blue Mountain/Birch Cove Lakes Park plans until July 4th, 2016 at clerks@halifax.ca, or by fax or mail, although at this point, with a feeling that the entire deal is a fait accompli, one wonders if anyone in power will really listen.