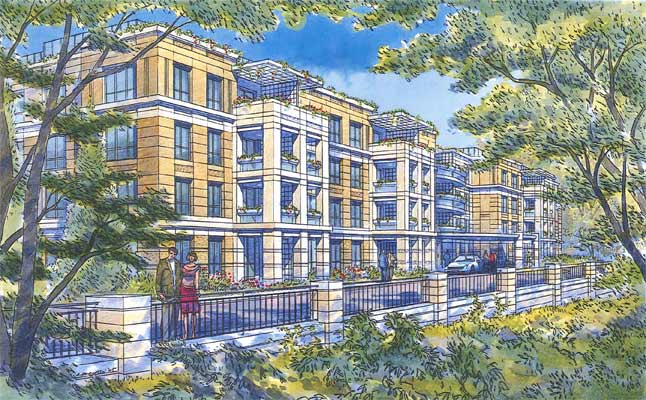 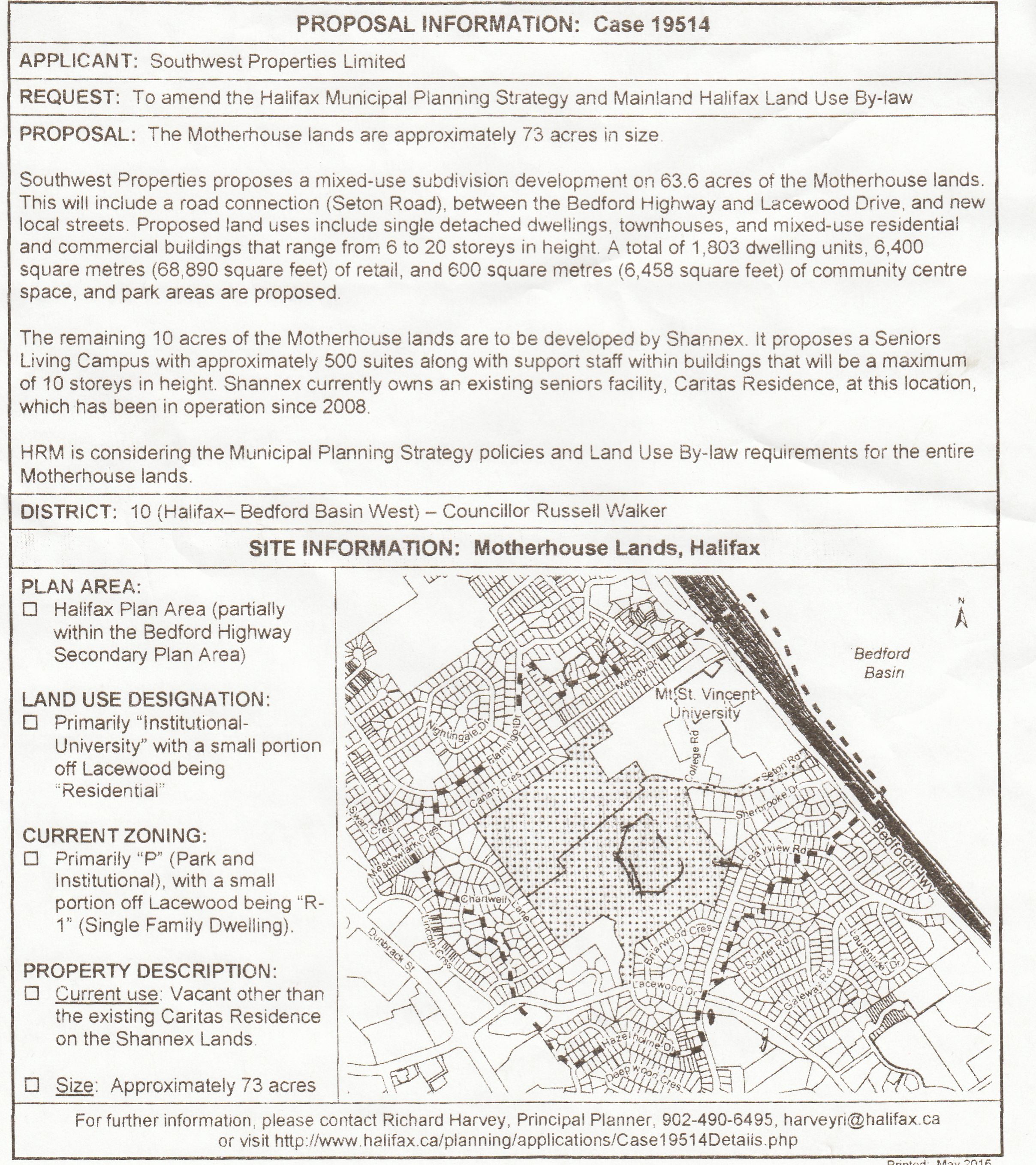 It was for decades the site of the Mount Saint Vincent Motherhouse, once the largest building east of Montreal. The Motherhouse was the home for the Sisters of Charity, until they determined in 2001 that it no longer suited their needs (largely due to the declining population of retired nuns who lived there). The grand old building was demolished several years ago. The current development proposal, from Southwest Properties, promises all sunshine and lollipops. They would create a Spring Garden Road style commercial and office strip of eight and twelve-story buildings, surrounded by a ‘mixed’ range of residences crowned by a single twenty story ‘signature’ building, which was, interestingly enough, not there in the last public meeting. I guess that’s what Southwest considers progress.

While the developers provided no 3-D imagery for the audience – estimated at over one hundred – the pictures were pretty, depicting a brown, grey and glass series of Jetsons-style space age buildings. The grid-pattern streets looked neat despite the fact that the steep gradient would play havoc with everything from construction to street safety, whether it be winter or summer.

What the concerned members of the public came to hear, of course, was something else altogether. Of the thirty or so speakers, only three had nice things to say about the project. The rest unloaded their concerns: traffic, schools, environment, over-development, the usual ground-level lamentations of those whose role in these meetings is ultimately to be ignored in the greater scheme of things.

Those less pleased with the development proposal repeated complaints from previous meetings where concerns like the potential loss of quality of life from a major intersection at Lacewood to connect to the Motherhouse lands had been blithely ignored. The developers did not respond. Instead they furiously wrote notes. Meanwhile, the soon-to-be victims must have been visualizing just how and when the bulldozers would arrive to destroy their accumulated quiet.

The chairman, from the City’s Planning department, also got on the wrong side of the audience right off the bat by stating that no one should applaud, as it might ‘intimidate’ speakers who, presumably, would be too timid to speak in favour of the project.

Thus the battle lines were set. The city, as articulated by the chair, stated the lands ‘should’ be developed due to the change in the use of the area. The representative of the developer, Eric Burchill, oozed a kind of contempt for those unfortunate enough not to appreciate what he called ‘a very special’ (i.e. very profitable) development.

The concerned residents clearly smelled a rat. The Motherhouse Lands are what keeps their neighbourhood a quiet and pastoral place. The Sisters Of Charity clearly  had no profit motive when the built the place. The proponents of development, on the other hand, spoke of a ‘holistic’ approach to justify the density.

The ‘holistic’ approach turns out to be a euphemism for lots of residents piled up on top of each other to justify transit routes and retail viability. Underneath this rhetoric, of course, was the thinly disguised, and very ugly, true motivation. The density is needed to justify greed, as simple as that. But that truth doesn’t sound tvery good at public meeting, so we get sunshine and lollipops instead, sprinkled with holistic sugar.

The residents who spoke all zeroed in on the project’s myriad weaknesses. The area is already overdeveloped, with major new projects coming on stream at the old Halifax West site in Fairview and the new development across from Farnham Gate Road in Rockingham. Dark thoughts were indeed uttered about how ‘people can’t sell their houses already’ and ‘there’s too much rental property on the market right now’. The phrase ‘where are all these people going to come from’ was repeated over and over. A housing bubble has been looming over Halifax since the Shipbuilding contract was announced. You could feel its tremors gently shaking the room.

Environmental concerns were cited. I spoke about the flooding during heavy rainstorms on the Bedford Highway, where the Motherhouse Lands drain. With all that new hard surface, I estimated the Bedford Highway might be closed for a much more significant portion of time if the project goes ahead. The city and the developer’s reps nodded their heads and wrote more furiously. I guess they never considered the situation, although a ‘stormwater’ study had apparently given the site a great big smiling ‘OK’, because that’s what those “studies” always seem to do in Halifax these days.

Schools and traffic were also listed. Park West, built for 500 students, is now at 850. Duc D’Anville Elementary and Clayton Park Junior High are both reaching their natural age to be replaced.

Traffic is perhaps the city’s Achilles Heel. The developer cited three major traffic studies stating that there would be no impact (remember what I said about these “studies”). This is clearly delusional. You might as well say the Moon is made of green cheese.

At this point the meeting declined from an attempt to ascertain public opinion to a piece of bad theater that tried to articulate the unspeakable and defend the indefensible.

Flirting with farce, the meeting suggested only tragedy. The fix is in. Almost everyone attending the meeting has the sick feeling that the city doesn’t really care about the views of the local residents. The land will be developed. The trees will be cut, the canopy will be stripped, and the surrounding residents will have to put up with ten years of construction hell (currently being so well orchestrated in downtown Halifax, where the city’s core has become a disaster area), all to see their quality of life and their own properties devalued so that a few can benefit while the many suffer.

For a legacy of the public good so personified by the Sisters of Charity, this is, frankly, shameful. Sadly, it’s also a pretty accurate snapshot of Halifax in 2016.

As a postscript, I spoke to a Southwest Properties official after the meeting. I mentioned that several senior banking officials I’ve spoken to have stated confidentially that they won’t finance big property deals anymore as they think the market is over-saturated. He assured me that this was clearly not the case.

I didn’t have the heart to tell him that the first attempt by a developer to rework the Motherhouse Lands collapsed in failure because the developer literally ran out of money, leaving a half-renovated Motherhouse open to the elements and ultimately forcing the Sisters to walk away from the deal. The Motherhouse then had to be demolished. It’s still an inconceivable outcome for many of us, and yet the Motherhouse is indeed gone. Forever. And soon the Motherhouse Lands will be gone too. Forever. Once “development” happens, you can never go back.

The only truly viable and community-appropriate use for the Motherhouse Lands is for it to be deeded to Mount Saint Vincent University to retain its current status as ‘Park and Institutional’. It is the only way to guarantee the quality of life for the area’s citizens.

One thought on “Developing the Motherhouse Lands”