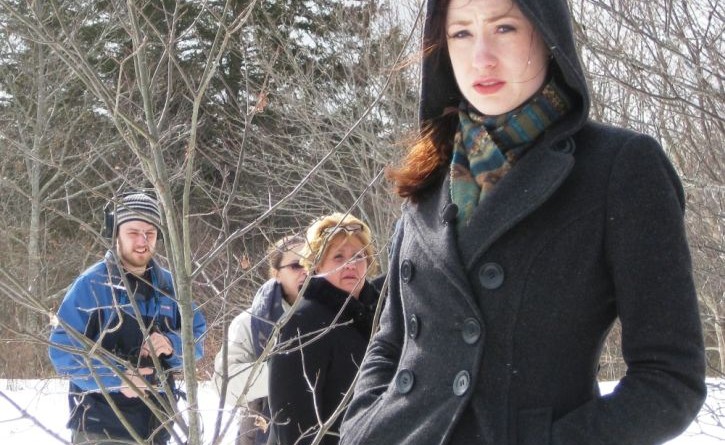 In Quinan, Nova Scotia, a cluster of a few houses about a half an hours drive from the town of Yarmouth on the Province’s far western tip, was a small farmhouse owned by Darlene McCall for 33 years. Unexplained occurrences had been happening for decades, but when McCall’s daughter, Shelley Paddock, moved in with her in September, 2008, they became even more intense and frequent. The activity manifested itself throughout the house and surrounding property, but three areas in particular seemed to be the most active.

The first was the basement, where Paddock and McCall described being pushed by an unseen force as they walked down the stairs, and experiencing cold once in the room itself. The second area was McCall’s spare room on the second floor. She claimed that she would hear footsteps on the stairs leading to the room, and that when she entered the room she felt a malevolent presence. Finally, there was the field behind the house. Both McCall and Paddock described the sensation of someone watching them when they would be out there, and Paddock told us that “whatever it is, I won’t come out here at night. I won’t stay out here. I don’t want to be out here. It’s not nice.”

No matter how many technological bells and whistles that you employ when you are investigating an allegedly haunted location, from digital video recorders to thermal cameras, in the end I really believe that it all comes down to whether or not you have a personal experience, because that’s what we’re all really looking for. Sometimes, however, that personal experience turns out to be more than you bargained for. At McCall’s farm, that’s exactly what happened to me when Holly Stevens and I went to investigate the haunting in February, 2009, as hosts of the television series Ghost Cases.

For one thing, the owners, Darlene McCall and Shelley Paddock, were genuinely afraid, which is something we hadn’t really encountered on previous investigations. As McCall described the basement to us, she was visibly shaking. “The basement is pure scary,” she said. “You get the feeling when you walk into my cellar that somebody is there to grab you. Not only the feeling of coldness but just pure fear. Something down there and he’s gonna get me.” When you see that kind of fear in someone else’s eyes, or behaviour, it can definitely have an effect on you as well.On the surface, the investigation had begun in the same way that it always does – Holly and I arrived with the camera crew, met with the owner of the location, got the back-story on what was supposedly going on, and then set up our gear and prepared to film. But at McCall’s farm, something was a bit different from the beginning, and both Holly and I sensed it.

Further, there was a real sense of isolation at the farm. The house is literally at the end of the road, out in the middle of nowhere, like something out of one of those horror films where people ask for directions at a gas station miles away, only to take a wrong turn and head down the one road to the one house that no-one should ever visit. It’s one thing to investigate a building like a hotel, where there are other people just a minute or two away; it’s another to spend a night in a supposedly haunted house miles away from anyone who might be able to help if you get in trouble. That plays on the mind, particularly when the owners of the property describe whatever it is that’s going on as “evil.”

As Paddock said, “I get the feeling that something wants to get me, to harm me and mine and I don’t know how to protect me or others from it.” Presumably, whatever wanted to do them harm would be just as eager to have a go at Holly and I.

Given that the basement was a key nexus of reported paranormal activity, I decided that I would spend time down there alone while Holly and psychic Kelly Muise, who was along for the ride that evening, were upstairs in the kitchen conducting a sort of séance to try and contact whatever spirits were in the house.

Now, while I have never ruled out the possibility that some psychic phenomena might be real, I have never been a proponent of using a psychic in one of our investigations. Dale prevailed on me to make an exception at McCall’s farm, however, so I did. The results wound up challenging all of my preconceived notions about both psychics and ghosts.

As I sat on the stairs in the frigid cold basement, with the door tightly wedged shut behind me, I could hear the proceedings upstairs in the kitchen through the floorboards. No matter what I thought of using psychics, I was struck by the fact that at least it was a shared experience between Kelly and Holly (and our camera crew), while I was stuck in the basement alone. That definitely ratcheted up the creepy factor. I couldn’t help but think that if there was a malevolent presence in the house, it would probably go for me first, as opposed to the group upstairs, because that’s what I figured I would do if I was a ghost with bad intentions. As a result, I felt like a lone wildebeest, cut off from the herd by a group of hungry lions.

About thirty minutes after I began my watch in the basement, I heard Kelly and Holly start to talk about a “murdered baby” being in the basement. They were both encouraging the spirit to make contact with me, and show me where the baby was buried. This was a development that I was not exactly in favour of – indeed, the digital video camera which I had set up to record whatever happened caught me responding to Kelly and Holly, saying repeatedly, “I don’t want to meet the baby,” and “don’t come show me where the baby is.”

And then it happened. Just after another exhortation from Kelly and Holly for the ghost to pop by and pay me a visit, the door opened behind me. As a skeptic, my immediate reaction was that it had been the wind, but I could hear when the wind was blowing, as it had been earlier (without moving the door, I should add), and it hadn’t been blowing this time. Further, the door didn’t open easily, as it wasn’t a perfect fit for the frame and got caught along the ground as it opened. Not the kind of door, in other words, that was easily pushed open by a simple breeze.

I immediately went outside to investigate – my first thought was that one of our crewmembers was playing a practical joke on me – but there was nobody out there. No wind, no people, just the still of the night, and McCall’s dog, lying next to its house twenty feet away from the basement.

That was it for me. I was genuinely scared, and had no intention of going back down into the basement. Despite the fact that it was well below freezing outside, I waited for another forty minutes until Kelly and Holly had finished their séance before I went inside. I told everyone what had happened, and I’m not sure they believed me, at least until we went downstairs, retrieved the camera, and played the tape back. Sure enough, there was the door, opening behind me, at the same time as Kelly and Holly had been telling the spirit to go to me in the basement. We were all a bit shaken, although I could see McCall and Paddock nodding their heads, as if to say, “we told you so.”

Stranger still is the fact that when we reviewed the data from my audio recorder, which I had with me in the basement, we heard what sounded like a baby crying at the same time as the séance was going on and the door opened!

The next day we all headed out into the back field, where the house had originally stood, to conduct what Kelly called a spiritual cleansing. Normally I would have been in a joking mood, because I’m very dubious about things like this, but given what had happened the night before I kept my mouth shut and simply observed the proceedings. Perhaps it was by chance, but as Kelly was spreading holy water over the area, some of it landed on me. I still wasn’t sure if I had encountered an evil spirit in the basement the night before, but I have to admit it crossed my mind that maybe a little holy water wasn’t a bad thing.

It would be easy to chalk this all up to coincidence. After all, that’s the simplest explanation, and as a result probably the easiest one for people to deal with. The problem with simple explanations, however, is that they’re not always the best explanations. With McCall’s farm, and the baby in the basement, I can’t help but think that this is one time and place where something extraordinary might really have happened, and where the explanation that makes the most sense is the one that challenges everything I thought I knew about our world.