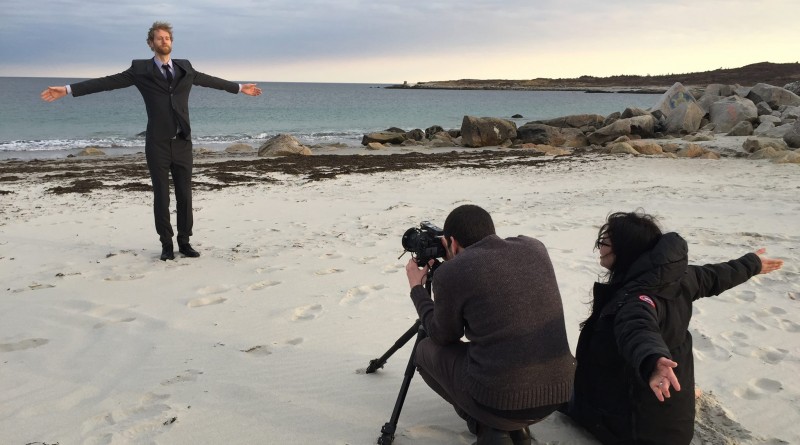 As talented as she is in front of the camera, however, Nicole also has a passion for working behind the camera, particularly for writing and directing, so I was pleased to hear in April that she had been selected as one of the five recipients for the 1K WAVE Atlantic program. The initiative, which is sponsored by Women in Film and Television Atlantic (WIFT-AT) and pUNK Films, provides an opportunity for five female filmmakers the opportunity to make a feature film under the guidance of industry mentors. Projects can be any genre, from narrative fiction to documentary to experimental.  The budget? $1,000. 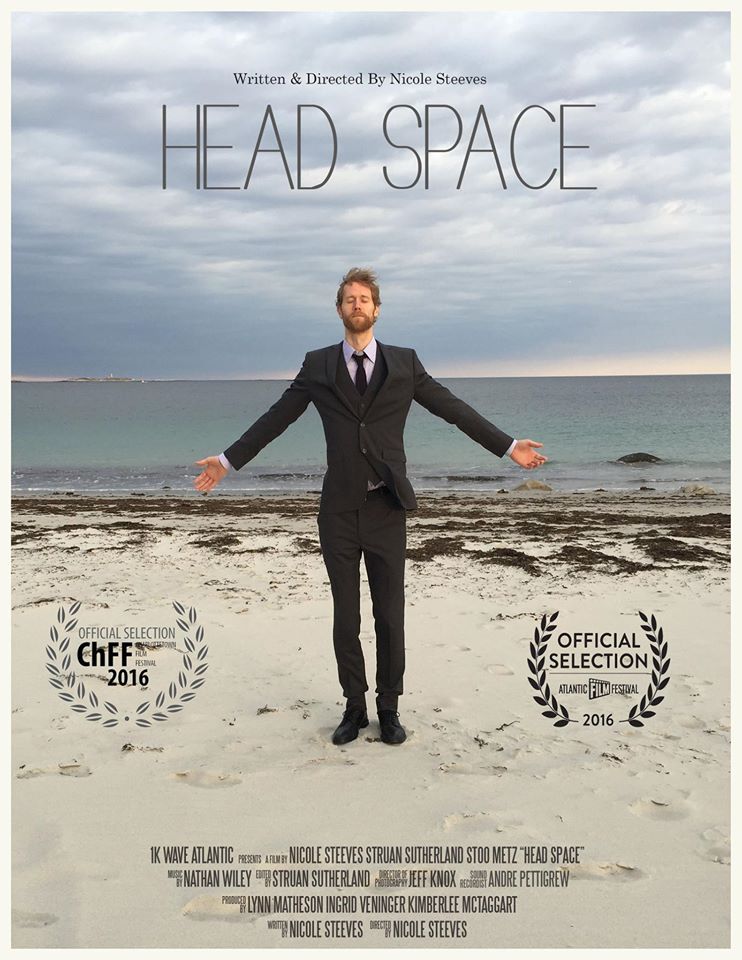 Paul: Congratulations – you guys made a feature film for $1,000…

Nicole: Actually, we came a bit under budget.

Struan: [Laughs] If I got paid, it would have been a lot more.

Paul: So how did the process work with the program, from beginning to end?

Nicole: There were five women across Atlantic Canada, and we each had five months to make the film. We were chosen based on a treatment that we each had written. Then there was one month to write the screenplay, one month to shoot it, one month to edit it, one month for post-production, and then one month for promotion, basically. Not only was it just $1,000, but it was also a huge time crunch. Luckily I had a lot of volunteer hours at AFCOOP, so all of the equipment ended up being covered, and Jeff Knox, who shot it, he used his own DSLR. The thousand dollars is the maximum cash you can use, but you can use in-kind services and equipment. The colour correction was done by 902 Post, for example, and the sound mix was done by the Hideout, both as in-kind contributions.

Paul: Quite the achievement. This is the first feature film for both of you, right?

Nicole: Yes. Struan and I have been making short films together for the past two years or so, since we met at the Film 5 program.

Struan: I moved to Halifax five years ago. I was an animator, so I hadn’t done many live action projects. I was making a film called The Hold-Up at Film 5 and met Nicole, and we discovered that we had similar sensibilities and found out that we liked working together. It was the first time I really worked on a project as part of a team, with other people – usually I would work on my own as an animator, do all the voices myself.

Paul: That sounds a bit like the character you play in Head Space.

Nicole: To an extent. The script came about because I got summoned for jury duty. I got the letter, and it said “Law Courts of Nova Scotia,” and I had a little bit of an anxiety attack. I thought, “what have I done wrong??” And then I opened it and saw it was for jury duty and I laughed. But when the $1,000 feature film program came up, I had to come up with a story that was contained enough that I could make it for $1,000 and the jury duty idea came back to me, and I thought, what if someone who was so socially awkward that they never left their home got summoned for jury duty. Struan is just very available to me, and he happens to be tall and delightfully awkward, which I knew he could handle, so while it’s not him in the film, I knew he would be very capable of playing that role.

Struan: [Laughs] I’m not that bad in real life.

Paul: He’s definitely a very weird character. How did you prepare for the role, especially given that you spend a significant portion of the film alone?

Struan: I had done a few of my own videos where I did what I think of as a similar character, called Rico LaGuerta. It was a fake cooking show that I did on YouTube. The Budget Gourmand.

Paul: Did you actually cook?

Struan: Yeah, I did. All the recipes were real, but I don’t think anyone cared. [Laughs] The character I was doing on that was a very socially awkward guy, which is what I think Nicole sort of had in mind…

Nicole: Yeah, but not to that extent. But I had seen him do that character, and it was pretty terrific. We discussed it, and I said it was like Rico, just not so much.

Struan: Yeah, he was pretty exaggerated. I definitely dialed it back for Head Space. 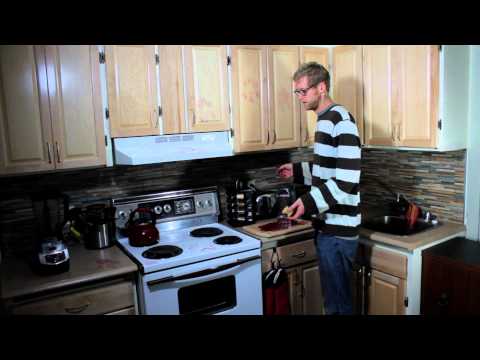 Paul: You spend a fair bit of the film talking to a mannequin that talks back, which could have come across as really fake and forced, but you managed to humanize that relationship, if I can call it that?

Struan: I think in my mind I was coming at it the same way as if I was doing a voice for animation, where I would just be recording everything myself, so I would be reacting to things that weren’t really happening. I would kind of play it in my head and then react, and I think I was just doing the same thing in Head Space with the mannequin.

Paul: How much rehearsal time did you get?

Struan: [Laughs] None at all. The script was literally finished the day before we started shooting.

Paul: How much did the finished film resemble what was in the original treatment that you submitted when you applied for the program?

Nicole: It was a fair amount different from what came in the actual script. There was a completely different “B” story in the treatment that didn’t make it into the final script. It actually turned into a love story instead. Once we started shooting, however, we stuck pretty close to the script. We might have cut a couple of things for time…

Struan: There were a few scenes that we changed on the day of shooting…

Nicole: Yeah, but as a structured story it’s really, really close to what we had when we started. Surprisingly so.

Paul: What was Nicole like to work with as a director, particularly as you two had worked together before but never in this way, as director and actor.

Struan: We just seem to work really well together. She was pretty lenient about not getting the exact wording that was in the script, for example. She gave me a lot of room to try different things. She just wanted to make sure that everything seemed natural, really. There were some stressful days to be sure, usually because we were exhausted. We sort of realized halfway through the shoot that we were nowhere near close to being halfway done…

Paul: How long was the shoot?

Nicole: It was originally going to be five days, but that just wasn’t going to work. We shot 36 scenes in one day. It was kind of crazy at times.

Paul: Here’s the question filmmakers always get asked: why should people come see this film, and what do you hope they get out of it?

Nicole: It’s dark and funny and the characters are real, even if they are a little bit exaggerated. I hope people will feel awkward watching it, because that’s part of the journey. It is a comedy, after all, but not a straightforward one. It’s a slow burn.

Struan: When we were shooting it we kept saying to each other, “This is a really weird movie.”

Struan: We found a place somewhere in between.

Paul: So what are the plans now? Do you guys want to keep doing this?

Nicole: I want to make one with more money. [Laughs] That being said, I know people who say, “Oh, I’ve made a feature now, look at me,” but I still want to make more short films. I won a pitch competition through WIFT so I have a bit of money and equipment for a new short, but yeah, hopefully I get the chance to do another feature soon as well.

Struan: I like acting. I haven’t done a lot of it…

Nicole: I think you’re going to be doing more after people see this film. You’re really fantastic in it.

Struan: Thanks. [Pauses] As much as I like acting, though, writing and directing are what I really love to do.

Paul: So if someone gave you a thousand dollars, would you do a film like Head Space?

Paul: One for all and all for one?

Nicole: It’s the only way.

Head Space screens at the 2016 Atlantic Film Festival at 3:30 pm on Monday, September 21st, at Park Lane. You can purchase your tickets here.