The iconic British Sci-Fi character Dan Dare has returned to the airwaves in a new audio series produced by B7 Media for Big Finish. The hero’s new incarnation takes off sonically with a reassuring swoosh of jet sounds in the first seconds of the opening episide, Dan Dare: Voyage To Venus, written by Richard Kurti and Bev Doyle.  The listener is dropped directly into the breathless action of a cocky, confident test pilot who is recruited for the latest British space program. The rest of the show is pure audio adrenaline.

If it all comes through in a rush, it’s supposed to. Dan Dare began as a comic book in 1950, and quickly morphed into a radio series that gets called back at least once a generation. Referred to as the “British Buck Rogers,” the fast-paced series relies on hard Sci-Fi settings (spaceships, antagonistic aliens) wedded to furious plotting in order to deliver maximum entertainment. He has become almost as much a touchstone of British Sci-Fi culture as Doctor Who, being referenced, for example, in songs by pop-rock icons Pink Floyd, David Bowie, Art of Noise and Elton John. A punk bank, the Mekons, took their name from the primary villain in the Dare mythos.

While there are some familiar elements in the new series by B7 (Digby, the sidekick, and Professor Peabody, the brainy female / possible love interest), this Dan Dare is smartly up-t0-date, complete with his “mobile” (phone, that is).

In the premiere episode Voyage To Venus, a strange craft with advance alien technology is found on Earth. Dare is introduced as a cocksure test pilot straight out of the Hal Jordan mold, pushing boundaries to their breaking point and then beyond. He is ordered to fly the alien craft to Venus, along with Digby and Peabody, to investigate. There they find a floating city lorded over by The Mekon, the evil supreme leader. Captured, the human trio must collaborate with an alien rebel group in order to outwit the Supreme Leader.

After a clutch of cliffhangers, Dare turns the tables, and then it is the Supreme Leader who must escape, but with the secret antidote for our intrepid trio of heroes, ensuring the setup for the next episode. Like Star Wars, the pulpy action outlines drive the story relentlessly forward while the lines between good guys and the bad guys are clearly defined. 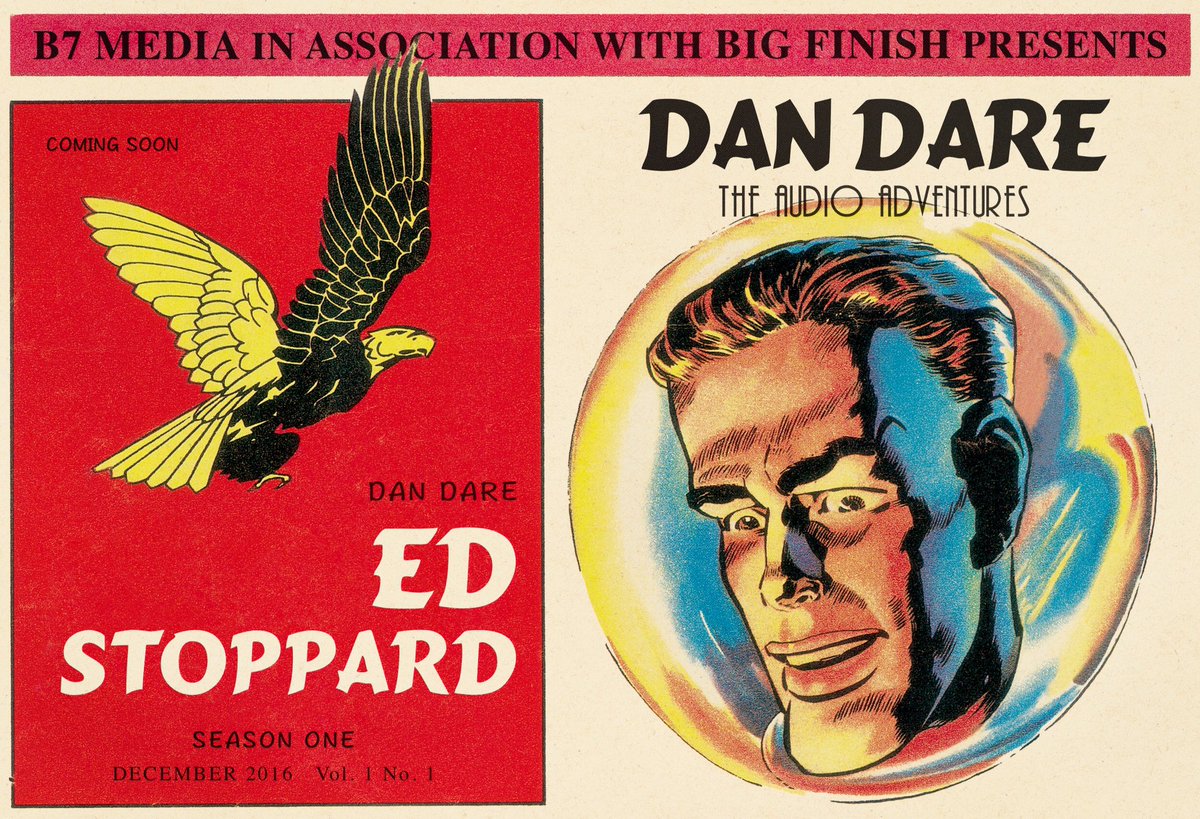 Punctuated throughout, however, are story points that sketch out the characters. Dare himself has a backstory concerning his father’s blacklisting over an experimental jet flight; Digby suggests the darker elements of the British class system; and Peabody’s background includes a Margaret Thatcher-like understanding of privatizing public interests, which makes for some delicious quipping.

Nothing, however, gets in the way of the sheer forward motion of the story. As audio drama, it’s not Shakespeare, but then again, it’s not meant to be. The series is not afraid of entertaining its audience. Despite its decline in Canada (the CBC stopped producing audio drama in 2012, for example), the medium remains wildly popular in Britain and countless other territories around the globe. Indeed, audio drama is still a vital art form, one that pauses to re-invigorate itself every few years.

The Dan Dare series is one of those periodic revivals, full of energy and insight on why a non-visual medium would become so imaginative. The comic book narrative transferred to the air makes for an ideal listening situation, allowing its audience to fill in the images for themselves. The delivery mechanism has changed (podcasts, direct downloads), but the wonder remains.

With expertly executed direction by Andrew Mark Sewell of B7 Media, a top-notch cast (Ed Stoppard as Dare, Geoff McGivern as Digby, Heida Reed as Peabody, and Raad Rawi as The Mekon), and fabulous music by Imram Ahmad, the cast and crew of Dan Dare: Voyage To Venus deliver a blast of pure audio excitement that sets the stage for an exciting series of Sci-Fi adventure.

The Dan Dare series is available at Big Finish audio.