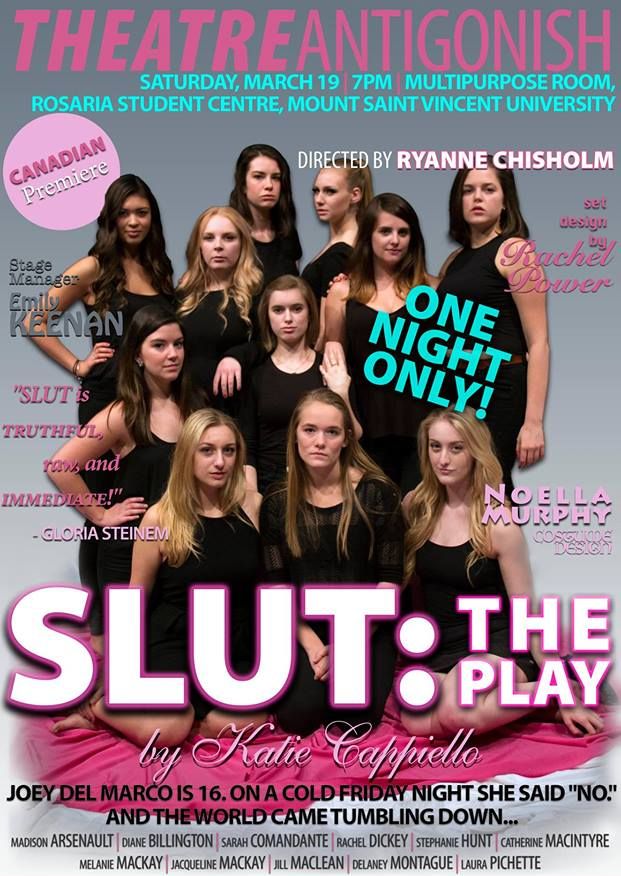 Consequently, the language is raw and the situations described are even rawer. The play begins in a locker room after a practice by a group of high school cheerleaders who style themselves the “Slut Squad”. The play presents all of the young women as potential sexual players, full of bravado and rhetoric absorbed from music videos, movies and advertisements.

It is brusque, in-your-face and meant to provoke and engage. Once that material is delivered, the young women move to smaller groups to build a couple of parallel narratives that eventually narrow to two sexual assaults, both told in first-person confessionals.

The first and longest tells the story of a “Slut Squad” leader named Joey who assaulted by two male high school friends in a taxi while a third male friend looks away. This third male is the twin brother of Joey’s best female friend, and when Joey reports the sexual assault her formerly close social circle collapses. These previously held intimacies allow for some ambivalence and questioning in the story, so that the automatic blaming of ‘good guys’ and ‘bad guys’ gets muddled, leading to a situation where clarity is missing.

What replaces the clarity is self-blaming and slut-shaming, which the play does a very good job of detailing. The second narrative has a university-age setting and provides some objectivity to contrast with the first story. The self-blaming and slut-shaming remains the same, however, and the climax of the dramas sees the two voices briefly matching up in unison, providing some very effective structure to the occasionally inchoate piece.

Directed by Ryanne Chisholm, Theatre Antogonish’s staging of Slut moves a bit too quickly and suffers from the usual variances in acting quality when dealing with a largely amateur cast (the actors are all students at Saint Francis Xavier University). The staging was also clumsy at times – some of this had to do with the fact that the travelling company couldn’t bring their full staging from Antigonish, but some of it lay in the often pedestrian direction and lack of basic stage management (more than once actors would deliver dialogue to another character with their backs turned to the audience, a fundamental error).

There was, however, a genuine enthusiasm and a very convincing sense of commitment from the company which translated to a great deal of onstage energy. At times, the performance was electrifying. Laura Pichette in the critical role of as Joey stood out in particular with a riveting performance where the confusion, regret, and anger that the character feels as she recounts the assault are all communicated to the audience with a true sense of despair, loss, and ultimately helplessness.

An after-show question-and-answer session allowed for the issues to explored in a frank and direct manner. Several of the players admitted that the intensity of the show demanded that they ‘decompress’ through extra explanations and discussions. It was a remarkable moment.

Chisholm admitted that, for her, this was where she thought theatre was going, in the direction of social engagement. The play and the entire presentation certainly did that, bringing contemporary issues to the forefront. Its initial run in Antigonish ended in December, but the troupe has toured the play around the Province since then. I heartily recommend that you take the opportunity to see the play if it comes to a theatre or school near you. It is an important work of art that deals directly with an issue that touches all of us, in one way or another.